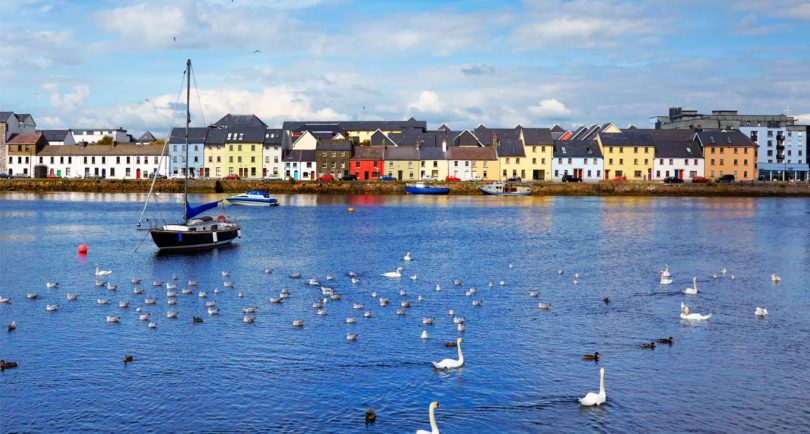 From the Claddagh to the Arts Festival and Macnas, Galway is the crown jewel of Irish culture and has long been held as a bastion of the Irish language, Gaelic games and art, and traditional song and dance. It should come as no surprise then that this year the vibrant city has been designated European Capital of Culture 2020. With festivals and events being held throughout the year, Galway is set to produce an innovative year-long programme that showcases the richness and diversity of Irish heritage. Galway is a place the natural and the urban collide, where traditions grapple with modernity, and where artists are inspired, it pulsates with activity, gorgeous scenery, and wonderful people. Delve into the beautiful city and county with these stunning books that cover many topics including captivating poetry originating from the region and exquisite sketch renderings of local landmarks:

An ‘Urban sketcher’ is one who excels at drawing and painting with quick, masterful strokes what is visible to the eye. An expert urban sketcher such as Róisín Curé deftly sketches on the spot whatever happens to be in front of her, what catches the artist’s eye, wherever she may be.

In this beautiful book, local artist Róisín Curé captures snapshots of life in the City of the Tribes in bold ink and vibrant watercolour. Her sketches show the beautiful details of Galway’s pubs, the musicians and buskers, the exquisite medieval stonework, the marine environment, the vibrant restaurant culture, and the colourful characters.

These striking sketches are accompanied by a memoir of Róisín’s life in Galway, and the conversations she shared with others around her while she sketched, giving local insights and a quirky first-hand account of the history and legends surrounding the most iconic elements of Galway’s urban landscape.

Edited by Thomas F. Walsh and photographs by Liam Lyons

The west of Ireland, the old province of Connacht, is, for the most part, a wild and beautiful place. Its rugged coastline faces the broad Atlantic. Its mountains and glens are often lonely places, but if you look closely against a slanting evening sun you might see the traces of some old cultivation ‘where mountainy men have sown’ as Padraig Pearse observed. And those of us who grew up there remember how it used to be when the fields were tilled and the turf was saved.

There are, of course, poems that recount our history. We are nothing without our history. Some are in our native Irish tongue. Poetry is a great vehicle of memory. Lines lodged in the heart can conjure up better than any other medium, I think, scenes from our childhood. The poems and pictures from this collection will be cherished by people from the west no matter where they have settled in this great world. There are, of course, poems that recount our history. The poets are, for the most part, native to Connacht. The photographs, like the place itself, have a haunting beauty about them.

A Portrait of Connemara

A Portrait of Connemara is a photographic exploration of one of Ireland’s most beautiful regions. A stunning and wonderful new perspective of wild landscapes, intimate portraits and untamed mountains from photographer Mark Joyce. Containing over 80 unique images, each one conveying the excitement and passion he feels for the area, this book captures the variety and glorious scenery of a rich and varied landscape. Years in the making, A Portrait of Connemara renews and redefines the magic of this much loved area. Connemara is a visual treasure trove, which faces the Atlantic on the west coast of Ireland. Full of hidden vistas and elusive views, Connemara spreads her villages out like breadcrumbs leading you ever homeward. With Galway city being European Capital of Culture 2020, A Portrait of Connemara is perfect if you want to experience the natural beauty of the county and city. This book will excite and delight those who know Connemara well and reveal its character to those who have yet to experience the majesty of one of Ireland’s most treasured landscapes.