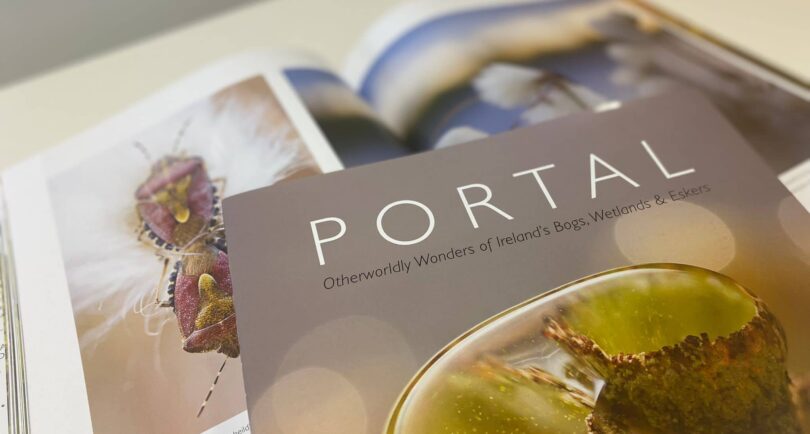 Writer and environmentalist Paddy Woodworth introduces us on his podcast The Naturalist’s Bookshelf to some of his treasures of nature writing. Last month, he chose Portal by Tina Claffey to add to his collection.

In recent years macrophotography has offered another very potent window on the worlds inhabited by small plants and animals. In her new book aptly called Portal, Irish photographer Tina Claffey plunges us into the hallucinatory multiverse of our bogs, wetlands, and eskers. It is a book to bathe and balm the soul with its mesmerizing beauty.

Claffey repeatedly refers to her images as otherworldly and that’s a valid reading, but I prefer to think of them as very worldly and earthy indeed: it’s just not the world and the earth that we like to think we know and with which we so easily become jaded.

The spore heads of horsetails for example, are a very common and accessible site in season, you might drive past a thousand of these non-flowering plants on a damp roadside bank in a minute and beyond their impudently phallic general shape you might not pay them any further attention. Claffey’s camera however, reveals their spores as set out in elongated ovoids, scintillating patterns of paled pink, hexagonal or indigo stars. Eat your heart out Fabergé – nature beat you to making designer eggs and a long time ago too. As Claffey points out horsetails predate the dinosaurs. 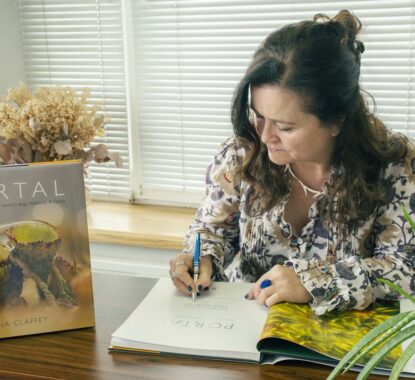 Tina Claffey author of Portal, signing copies of her book.

Bogs are Claffey’s great love, and she clearly feels an unabashed spiritual relationship with these ever shifting mosaics of plants, water, and insects. She reflects with exceptional intensity, a welcome transition that has been taking place in recent years, shifting our public perception of peatlands from wastelands to Irish rainforests. If you think that is hyperbole just open these large format pages “sometimes” Claffey writes in one caption, “nature reveals such treasures that all I can do is give gratitude.” In that particular case the revelation, not visible except as something tiny floating on the surface of the bog pool until she focuses to her macro, “is a pair of mating snails: their bodies cobalt blue against coppery water.”

With Claffey as our guide we become Lilliputians in forests of lichen, with names like ‘Bog Beacon’, ‘Trumpet Cop’ and ‘Devil’s Matchstick’. She sometimes photographs the same species several times, reminding us that a fungus can be as individually distinctive as an oak. Unlike any Dillard, she is unperturbed by the ubiquity of killing in the natural world she loves so deeply. Unfortunate midges glittering like gems in a mist spangled spider’s web are simply a ‘good morning’ for the spider.

Claffey’s work is a very material realization of Blake’s aphorism that “If the doors of perception were cleansed then everything would appear to us as it is, Infinite.”. Her images evoke a sense of awe before the exquisite intricacies of the natural world and they help us to learn to love it better and that is surely one of the ways in which we may be moved to stop destroying it.

If you find you love this book than get a hand lens or a macro camera and take a deep dive into this world yourself: you don’t have to go further than the nearest plant.

You can listen to the full podcast here and buy Portal on our website here.