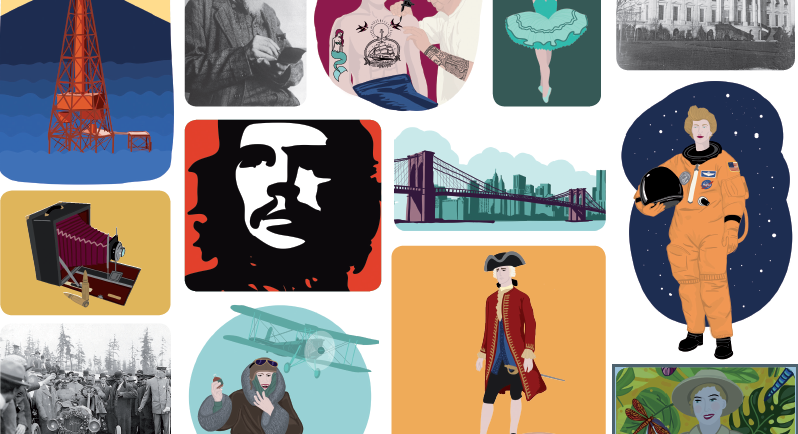 With the Easter weekend just gone, World Heritage Day 2022 is probably not the first thing on your mind after all that chocolate, but it’s nice to honour fellow Irishmen and Irishwomen who have changed this planet for the better. Irish people have made significant contributions to world science, art, and literature and there are many Hibernians that you may or may not know who have had a big impact on the world. From the invention of colour photography to the torpedo and even the hypodermic syringe, Irish innovations have made big contributions around the globe. From the brave Irish women who led the way in the age of flight, to the selfless heroes who risked their lives for others during the Second World War, here are just some of the many incredible people from this tiny island and their amazing achievements.

Inventor of the submarine 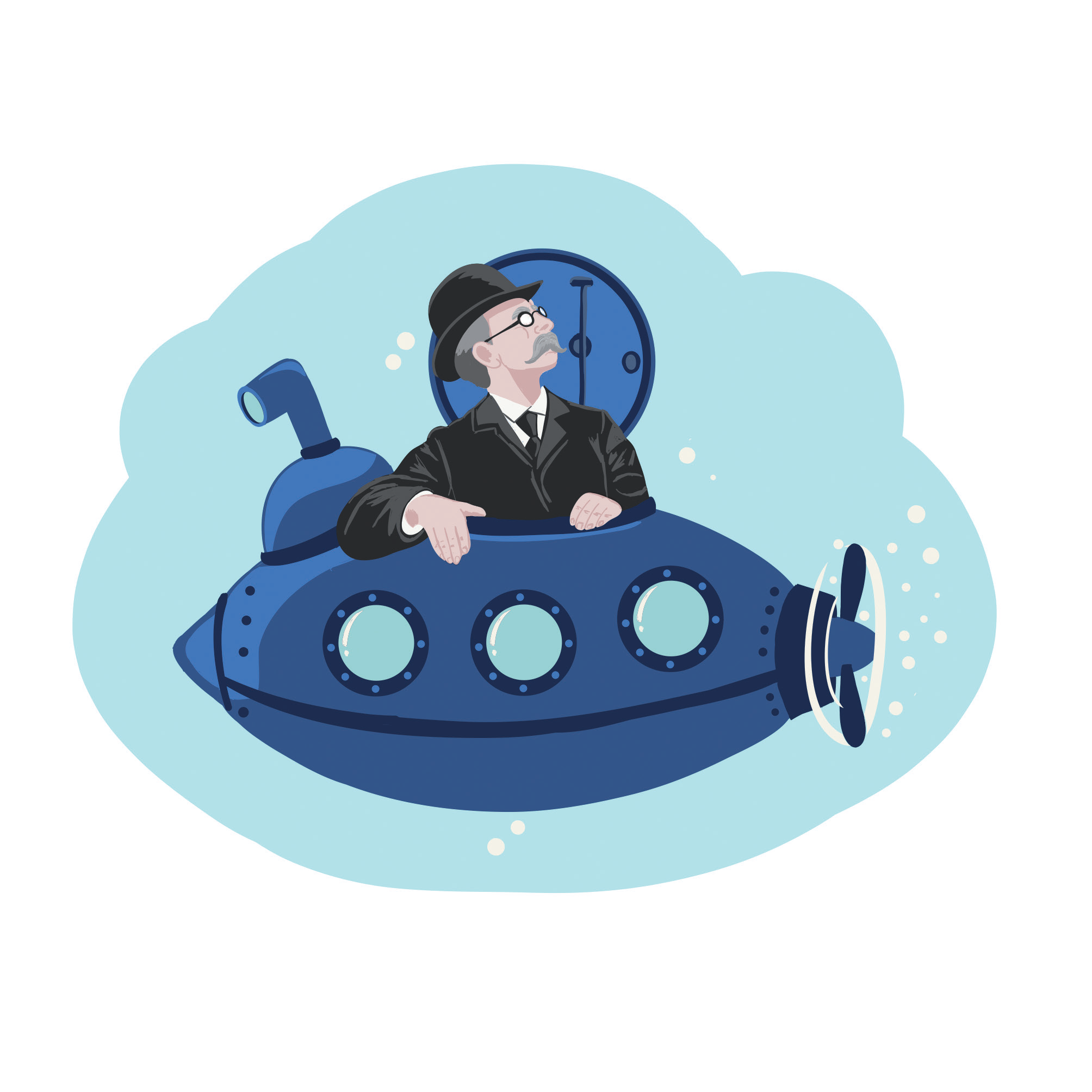 As unlikely as it may seem, the modern submarine is indeed an Irish invention, developed by the talented John P. Holland from Liscannor in County Clare. Born in 1841, Holland was the son of the local coastguard, and spent his formative years living in the coastguard’s cottage overlooking the Atlantic Ocean. The sea was obviously a constant in Holland’s life, and some accounts also cite the influence of Jules Verne’s 20,000 Leagues Under the Sea as an inspiration for his designs. Before Holland turned his hand to inventing full-time, he was a teacher in various places in Ireland including Cork, and it was there that he drew up his first submarine designs in 1859 that formed the basis of his successful prototype almost 20 years later.

He immigrated to the United States and in 1897 the Holland VI was launched, the vessel that would secure Holland’s place in history as the father of the modern submarine. This model’s major innovation was its successful use of an electric motor for underwater propulsion and a petrol engine for use when surfaced; the vessel also included a reloadable torpedo tube and was the first truly capable submarine of the kind we would recognise today. He died in New Jersey in 1914 at the beginning of the First World War, where his invention revolutionised naval warfare forever. 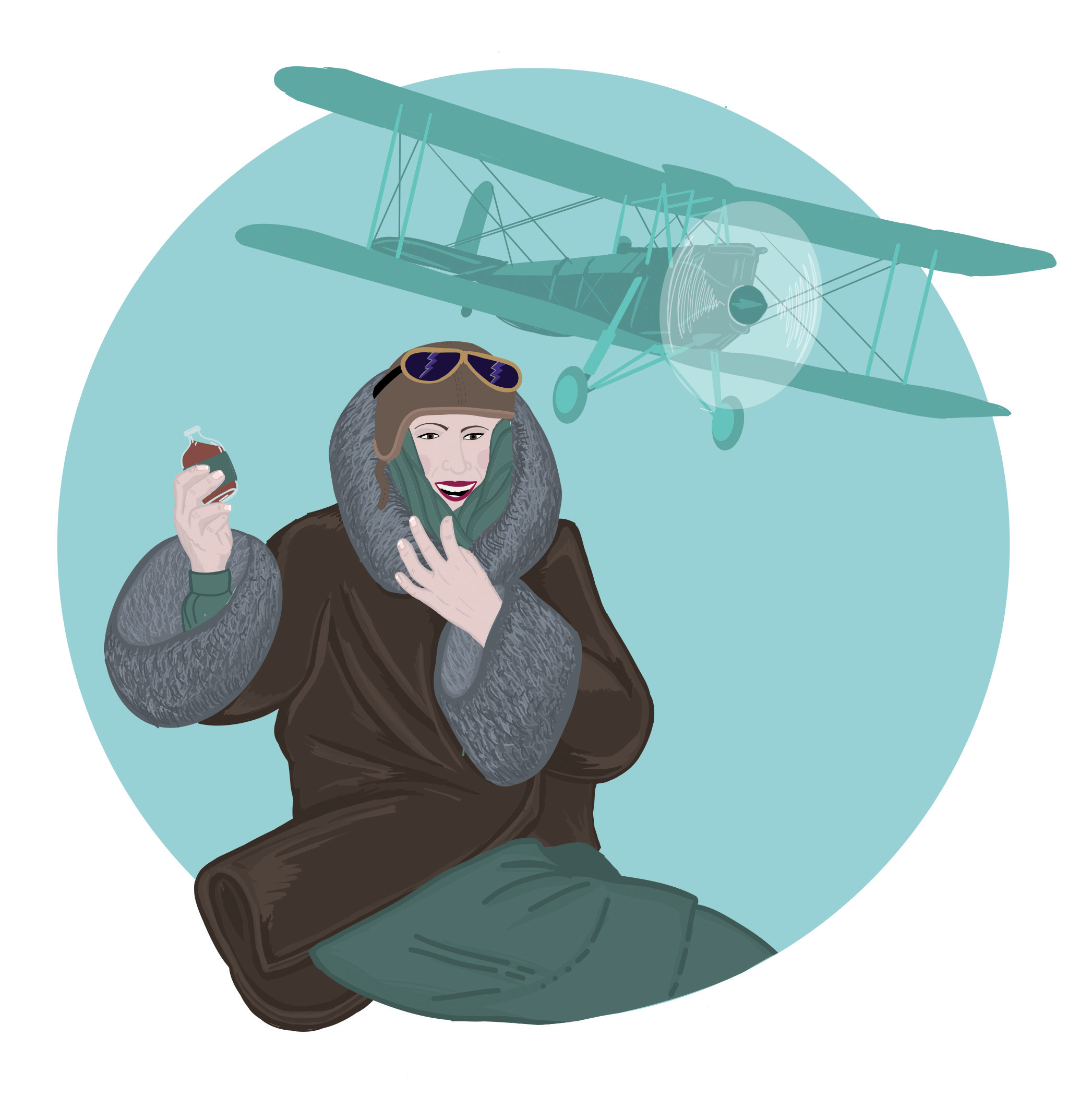 The story of Limerick aviator Lady Mary Heath is one of short lived superstardom. During the age of the aviation pioneers, hers was a name that was mentioned alongside Amelia Earhart or Charles Lindbergh. She was born Sophie Peirce-Evans at Knockaderry House near Newcastle West, County Limerick in 1896. She studied at the Royal College of Science in Dublin.

Sophie’s first long-distance flight was in 1925, when she flew to Prague to attend the eighth Olympic Congress. It was the last congress attended by Olympics founder Pierre de Coubertin as president, and Sophie petitioned him and fellow Olympic Council members to admit women to compete in the events; as a result, women were allowed to compete for the first time at the 1928 games in Amsterdam. In 1927 she married Sir James Heath, becoming Lady Mary Heath in the process.

In 1928 she became the first pilot (male or female) to complete the gruelling flight from Cape Town, South Africa to London. She was the first woman to complete this trip. The journey took her three months and was completed in the Avro Avian aircraft her new husband had bought for her.

Mary instantly became one of the most recognisable people in the world, a genuine star of aviation’s golden age. But Amelia Earhart, who became the first woman to fly across the Atlantic, soon eclipsed her fame. Not content to fade from the limelight completely, Mary eventually set up her own aviation business near Dublin and was responsible for training many of the first employees of the new Irish state
airline, Aer Lingus.

The Dawn of Dracula 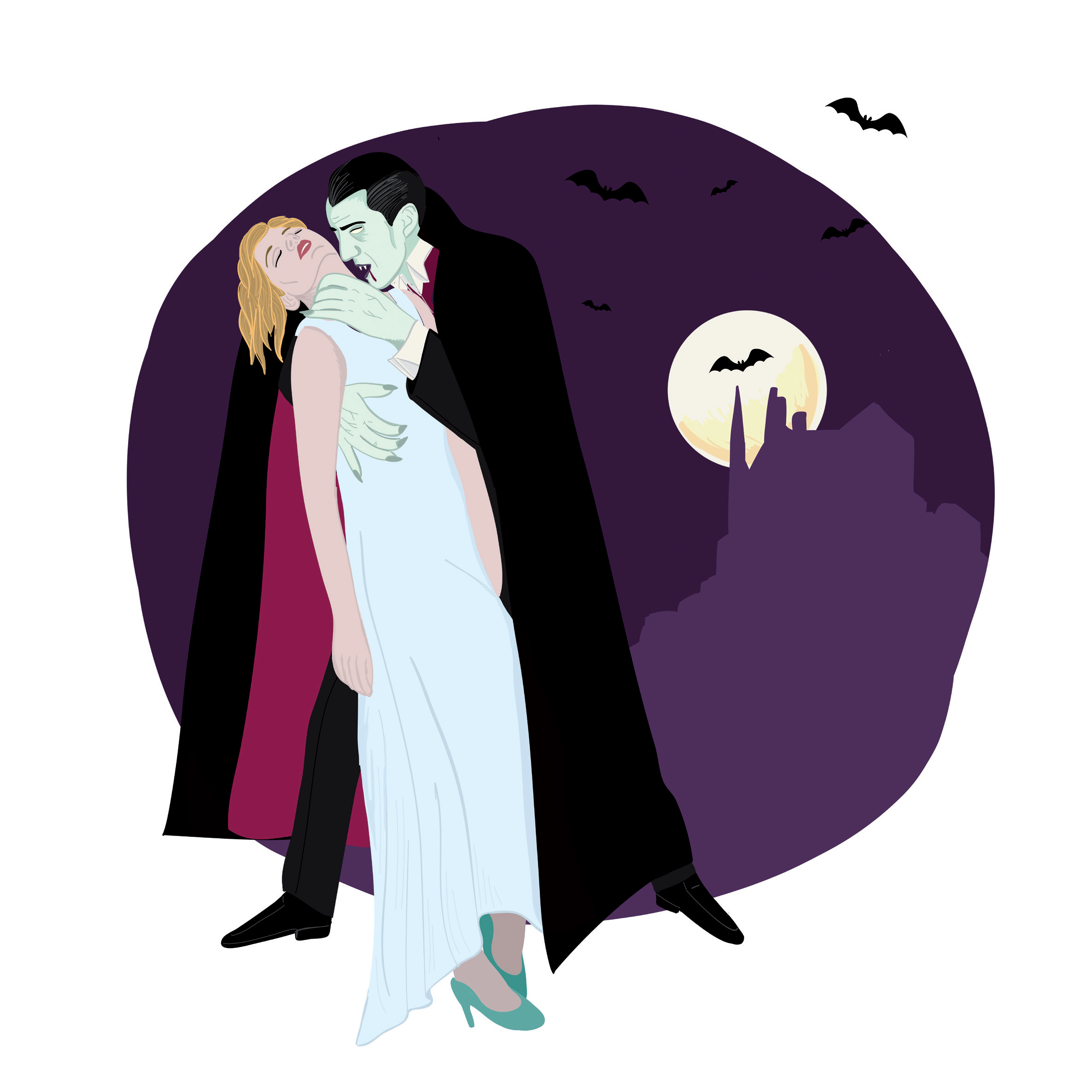 There’s an Irish writer who will forever be remembered for writing one particular book, one of the most influential works in the history of fiction; his name was Abraham ‘Bram’ Stoker and the book was Dracula. Stoker was born in Dublin in 1847, one of seven children of Abraham and Charlotte Stoker. He was ill as a child and often bedridden but by the age of seven he was fully recovered. He attended Trinity College in Dublin where he studied mathematics, graduating with honours in 1870. Stoker then joined the civil service like his father before him, but he also took on some additional work in the evenings writing theatrical reviews for Sheridan Le Fanu’s Dublin Evening Mail. Always interested in theatre and literature, he had established a friendship with the famous actor Henry Irving through his work as a reviewer, and Irving encouraged Stoker to write himself.

Dracula was published in 1897 and was immediately successful and has continued to grow in popularity ever since its publication. The novel was inspired by a trip to the English coastal town of Whitby that Stoker took while touring with Irving in 1890. He was also inspired by the vampire story Carmilla by his compatriot Sheridan Le Fanu and his own life-long interest in folklore from around the world. He died in London in 1912 and since his death Dracula has become the most successful horror novel in history and one of the most adapted works of any genre. 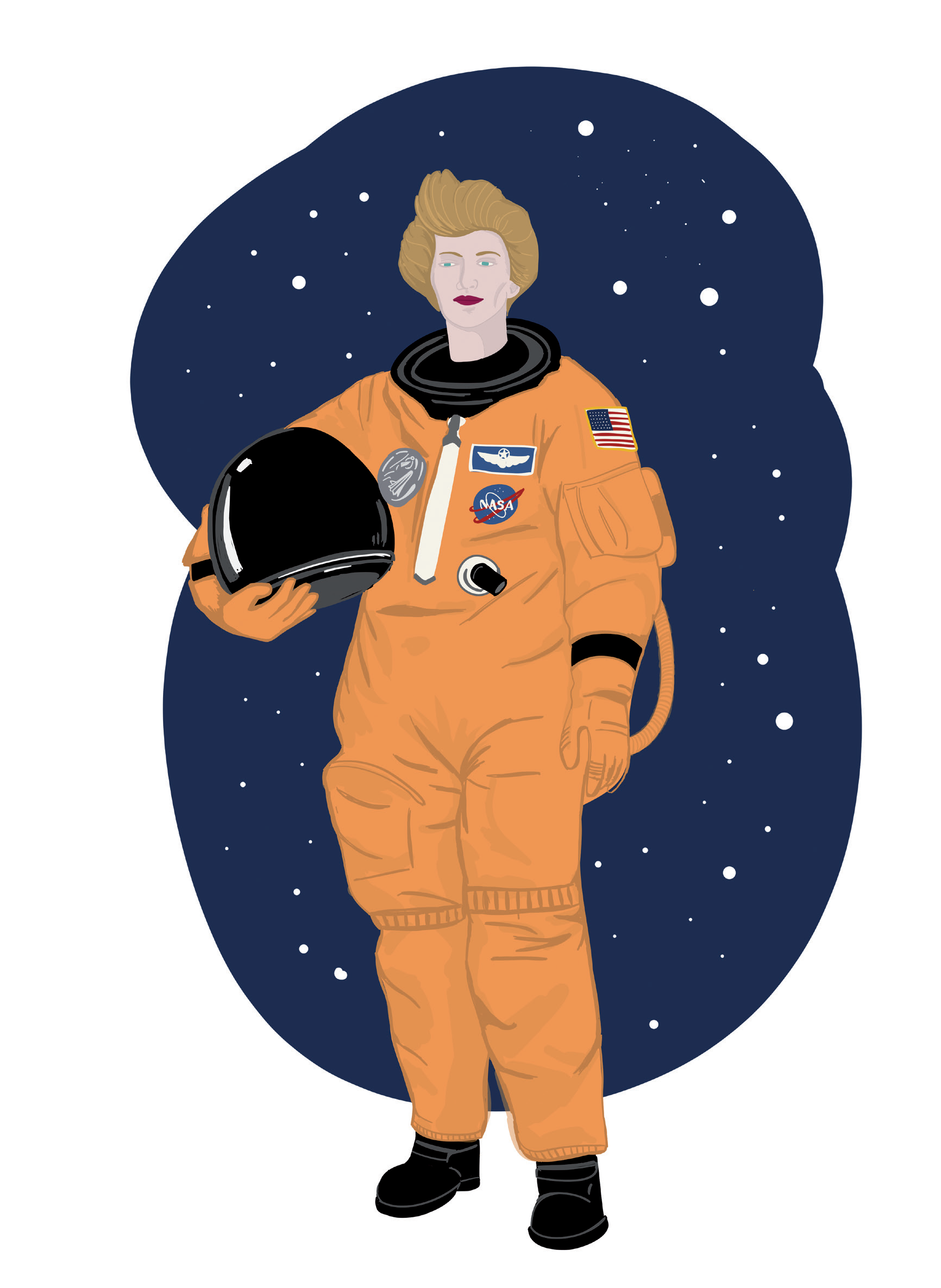 Eileen Collin’s parents both immigrated to the USA from County Cork and raised their four children in Elmira, New York. Eileen was born in 1956 and developed an early interest in flying and the burgeoning US space programme. She was schooled in Elmira before attending the nearby Corning Community College where she earned a degree in mathematics and science in 1976. She went on to Syracuse University where in 1978 she graduated with a BA in mathematics and economics. She then studied for a masters degree in operations research at Stanford University before completing her education with an MA in space systems operations management at Webster University in Missouri.

Collins joined the Air Force and was one of four women who were selected for pilot training at Vance Air Force Base in Oklahoma where she qualified as a pilot. Collins enjoyed a long and varied career as a pilot, flying a variety of aircraft and working as a pilot instructor. She was the second woman to attend the US Air Force Test Pilot School and was selected to join the astronaut programme in 1990. Her first mission for NASA came in 1995 on the space shuttle Discovery, where she became the first woman to pilot the shuttle; the mission included the first rendezvous between a space shuttle and the Russian space station Mir. In 1999 Collins became the first female commander of a space shuttle mission when she took charge of the Columbia’s mission to deploy the Chandra X-Ray Observatory.Her final mission this time of the shuttle Discovery in 2005, was the first mission following the Columbia disaster in 2003, which resulted in the mission’s crew being killed as the shuttle re-entered the Earth’s atmosphere.

Collins has received multiple honours since retiring from her NASA career, including being inducted into the National Women’s Hall Of Fame and the Astronaut Hall of Fame. The approach road to Syracuse Airport has been named after her and the New York State Legislature passed a resolution honouring her career. In Ireland she was conferred with an honorary Doctor of Science degree by University College Dublin. 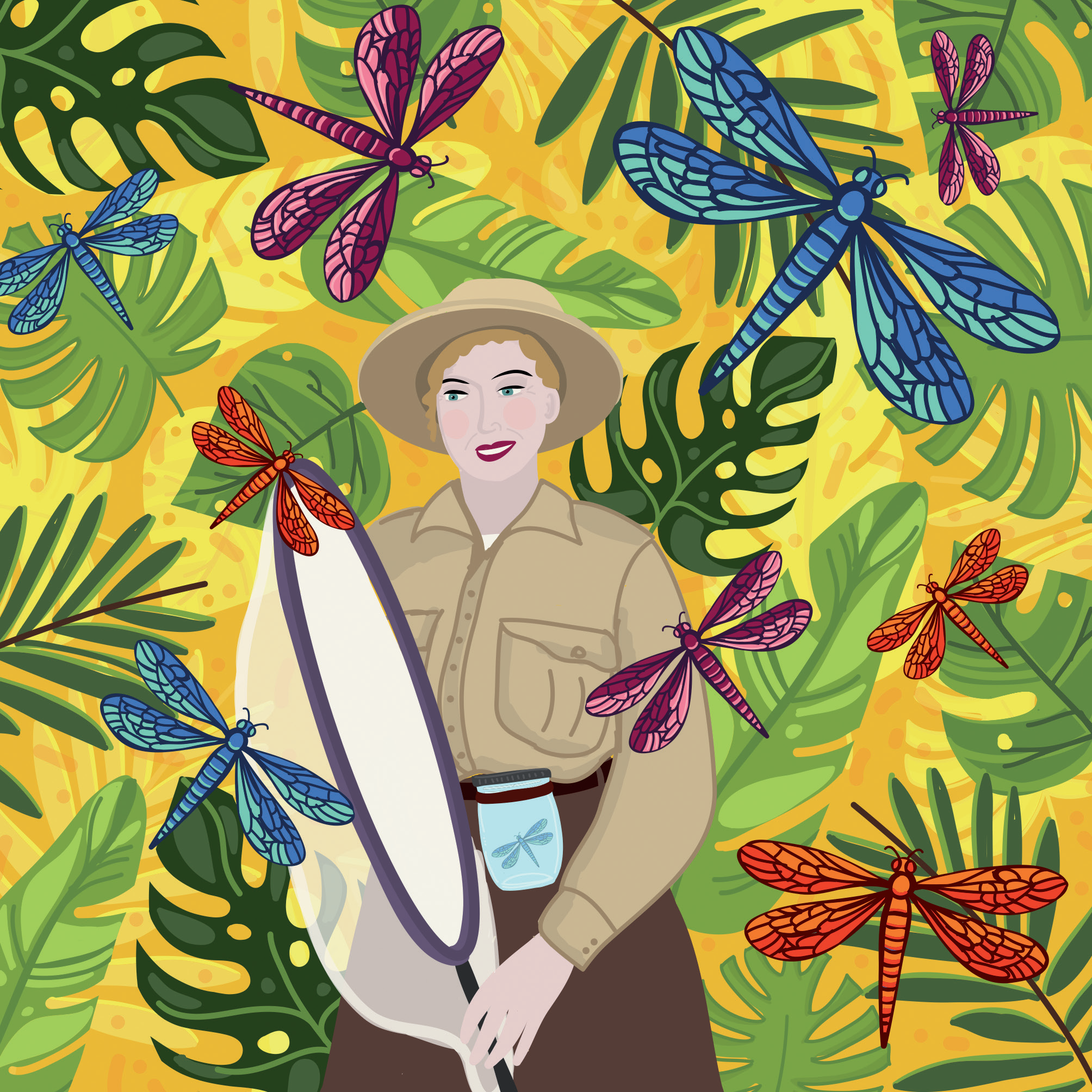 Known as ‘Madame Dragonfly’, Cork native Cynthia Longfield enjoyed an adventurous career as one of the leading entomologists of her generation. She was born in London in 1896, the daughter of Montifort and Alice Longfield, of Castlemary in Cloyne, East Cork. The youngest of three sisters, their family home was burned down during the Irish War of Independence in 1920 but was later rebuilt as Park House.

After the war her career as an entomologist began to take off when later that year when she joined an expedition to the Galapagos Islands and Pacific as an assistant to esteemed entymologist Cyril Collenette. The two set off into the jungle, using machetes to cut down the undergrowth and collecting specimens for the Natural History Museum in London.

In 1925 she became the first female member of the Entomological Society in London and joined the London Natural History Society in 1926, becoming its president in 1932. She also began working at the Natural History Museum in a voluntary capacity, cataloguing the Odonata (Dragonfly) grouping of insects that was under-researched at the time. In 1927 she travelled again, this time to Brazil’s Mato Grosso state and returned to London with 38 specimens, including three that were previously unknown, one of which, Corphaeschna Longfieldae Kimmins was named after her.

In 1937 she published The Dragonflies of the British Isles, which became the standard reference text on the Odonata order of insects. It was following the publication of this book that she earned the nickname “Madame Dragonfly” and the name stuck!

An exhibition of her life and work was held at the Royal Irish Academy in 2006.

These amazing Irish people feature in David Forsythe’s What Have the Irish Ever Done For Us? that tells the remarkable stories of some well-known and not so well-known Irish people who have made their mark with courage, ingenuity, perseverance and selflessness whose influence are felt far beyond Ireland’s shores. Grab your copy here.