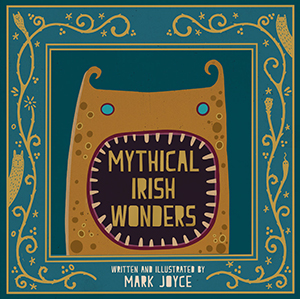 Ireland is well known as a land of storytellers, a tradition that dates back centuries to a time when tales of giants and epic battles were told around the fireplace. While we’re lucky to have a treasure trove of legends and myths, many of these strange and odd stories have been lost over time. That is, until now.

Within these pages discover how Queen Medb was killed by a lump of cheese and how Mad King Sweeney was turned into a bird. Learn of Ireland’s four magical treasures, including a cauldron that never goes dry, how the ancients divided the year into four, and how a bardic poem could kill ten rats and ended up influencing Shakespeare!

This book is sure to delight people of all ages with beautiful, full-colour illustrations accompanying each entry. Join Mark Joyce, the bestselling author of Mythical Irish Beasts, on a journey through an ancient Ireland nearly forgotten.

Mark Joyce is a native of Connemara and has a varied background in the arts. He studied in Dun Laoghaire College of Art and Design and worked in the film industry in Ireland for a number of years.

Mark has worked with leading Irish craft companies as a designer, producing posters for numerous festivals as well.

His photographic book A Portrait of Connemara was published by Currach books in 2015, and Mythical Irish Beasts was published in 2018.