Halloween House: A book that fights fear with laughter

Halloween, what an intricate and fascinating holiday. As an Italian, I didn’t know much about the story behind the night of October 31st before I came here, since we don’t feel as much of a connection with the Halloween ritual as the Celtic countries. The reason why I first came across the mysterious reality of Halloween is very simple: the illustration on the cover of The Halloween House made a breakthrough in my heart at first glance.

Hence, for those of you reading who know very little about this holiday, but I’m now going to try my best to summarize the origins of it. It all started with the ancient population of the Celts and their festival of Samhain. Celtic people, who mostly lived in Ireland, UK and France, celebrated their new year on the 31st of October from sunrise to sunset, the day that was most associated with human death according to their beliefs. Moreover, they believed that on the night of the 31st of October the ghosts of the dead returned to earth, bonfires were lit and costumes worn so as to fight off  the souls of evil men of the past.

It didn’t take long for All-hallows or All-Hallowmas, to incorporate some of the traditions of Samhain and so, as time passed by, the evening preceding All Saints Day, was first called All Hallows Eve and eventually became Halloween.

Nowadays, when the word Halloween comes to your ears you immediately think of your children or activities such as trick or treat or others always related to the world of childhood. That is overtime what the night of the 31st of  October has become.

Since we all now have a clearer idea of the origins of this holiday it is important to share it, in a nice and fun, with the little ones. There is no better way to do that than giving a careful reading to The Halloween House by Riley Cain. It is a book that can bring children closer to the world of reading and at the same time to the beliefs behind one of the most important holidays ever. The way the author does it is unique: she wrote a funny and interesting poem for every day of October, describing a different character for each.

The following are just some verses of the three poems that struck me the most: 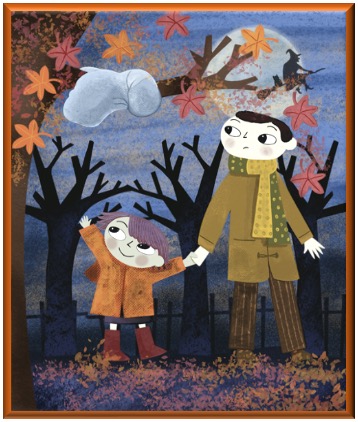 I saw the witch’s knickers,

Hanging in a tree,

Daddy said it was a plastic bag,

But it seemed much more to me.

They were filthy dirty ragged pants,

Fluttering in the breeze,

Snagged up in the spooky branches,

And hanging by their knees.

Could it be wash-day in the witch’s house,

And a tall tree great for drying!

What I really found exceptional about this poem is that the author has been able to describe a character, a witch, who in most cases scares children in a way that not only does not, but also creates fun and laughter. I think this is one of the strengths of this book: to give the tool of laughter to overcome one’s fears. 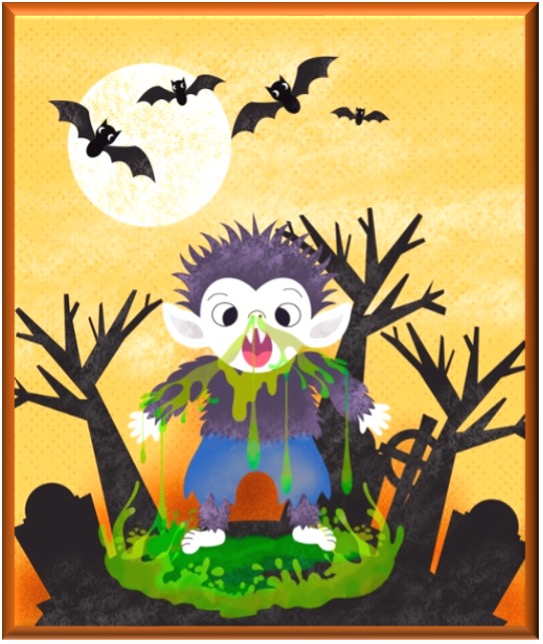 Just consider for a moment,

And quickly you will understand,

A single chance comes once a month,

As the moon to full it grows,

The hunt begins for a hairy beast,

And the riches up its nose.

Or even slimy sleeves,

So how many workable options,

Do you think that really leaves?

This poem, as well as most of those found in the book, amazes for its simplicity and originality. In fact, it describes a monstrous character capable of creating dismay for children, but always trying to overcome the barrier of fear through the lightness of the language.

The one you’ve heard about,

When they put the bodies in the earth,

It was me who dug them out.

The money I made from robbing graves,

Let me bet and drink and feast,

I surely made a pretty penny,

From the recently deceased.

But my life of wicked crime concluded,

When the judge said I should swing,

Oh, if only I had known back then,

The trouble that would bring.

This third and last poem is truly one of my favourites because it skilfully combines a raw reality like that of the activity of stealing to a fantasy typical of the Halloween period which is the presence of the souls of the dead. As happened to me, you will be amazed not only by the poetry but also by the illustration that accompanies it, which is really captivating!

You can easily understand by reading these poems that the author succeeded in creating some interesting and fun stories that have the power to capture the attention of younger audiences, creating a unique atmosphere that surrounds every single poem, making the whole book look like a deep dive into the mysterious realm of Halloween.

Through browsing The Halloween House your children or grandchildren will have the opportunity to discover how language can be used in different ways to express different emotions and this would represent the perfect way to approach poetry for the very first time.

At this point, I can only strongly suggest that you take a look at The Halloween House by Riley Cain, which is available to purchase on our website and in all good book shops around the country!