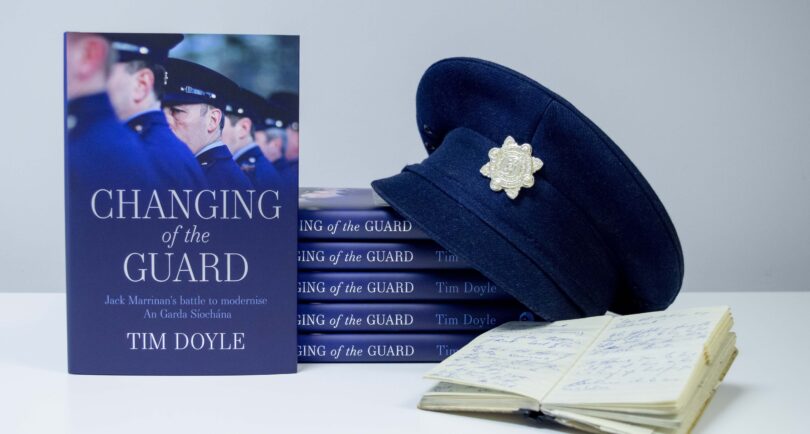 “Guards have the real secrets of Ireland,” according to retired garda and author Tim Doyle.

Tim is sitting in the Betelnut Cafe with his former colleague and fellow retired garda John Smith, who served at Bray Garda Station for many years.

Both men are part of what Tim calls the “second generation” of An Garda Síochána, recruited during the 1950s and 1960s. They have met at the popular Bray cafe to talk about Tim’s new book ‘Changing of the Guard: Jack Marrinan’s battle to modernise An Garda Síochána’.

The book focuses on the work of the late Jack Marrinan, general secretary of the Garda Representative Association (GRA) for 27 years. Jack campaigned for reforms to pay and conditions for gardai and his Tim’s book chronicles that work, while capturing what it was like for many gardai serving at the time in a very different Ireland. They share their stories with the reader.

“Guards have the real secrets of Ireland because any incident of note that ever happens in this state there was a guard present,” said Tim. “They had to go and were often first on the scene. They saw the real tragedies of Ireland, and they are still doing it.”

Originally from Co. Clare, Jack Marrinan completed his training with the gardai on April 22, 1954.

He was of average height, but at the time, tradition meant that the tallest guards were sent to Dublin stations, with the remainder divided between the rural ones.

Jack was posted to Rathfarnham Garda Station, then became part of the Wicklow-Dublin division. He attended Trinity College Dublin, having received a dispensation to study there from Archbishop John Charles McQuaid.

While this book’s focus is national, Bray and Wicklow feature strongly in the book, as does the campaign to modernise garda pay and conditions.

Jack campaigned for improvements to working conditions for gardai and Tim argues he was a key figure in the modernisation of An Garda Siochana as an organisation.  Conditions for gardai at this time were tough, discipline was rigidly enforced and the pay rates were low.

In 1961, garda members with five years or less service were excluded from a pay increase awarded to their more experienced colleagues. This sparked a meeting of  hundreds of young gardai at the Macushla dance hall in Dublin on November 4, 1961, in contravention of the Garda Commissioner’s orders. This meant that the meeting was illegal, but it would become a trigger for reforms.

Jack was one of the speakers at the event after he was called upon to take to the stage by a garda who was serving in Bray. Tim describes the testimony from many of the guards who attended that fateful meeting.

“A man called John Acton stationed in Bray called Marrinan on the stage. They were shouting ‘we don’t want him ‘cos he was small’, but he [Jack]  put his hands up and said ‘come on lads’”.

Jack took charge and “the whole thing took off”.

After the Macushla meeting, Jack was one of 11 gardai to be dismissed for their involvement in the illegal gathering. He and his colleagues would be re-instated 11 days later following the intervention of Archbishop McQuaid.

A second ‘Macushla’ meeting was due to take place in Bray at a hotel on November 12, 1961. According to one account contained within the book, Bray was chosen for its proximity to Dublin and as the home of the Assistant Commissioner with responsibility for the Dublin Metropolitan Area William P Quinn was near the station.

John Smith joined the gardai in 1962, after working in England for four years.

A Roscommon man, John was posted to Bray after he completed his 18 weeks of training. In 1965, he was elected as Bray’s representative to the Garda Representative Body (GRB) as it was known at that time.  The role of garda representative “wasn’t a very popular job and management didn’t like you”, John said.

“Some of the people you were representing, for their own reasons, would have nothing to do with you. It was a job no one wanted, but someone had to do.”

John served in Bray as a young garda. At that time, guards were required to live in the station.  He recalls a “big room, about a dozen beds in it, no carpet on the floor, no heating and old Victorian bed linen”.

Pay and conditions were very poor for gardai at that time. They could be asked to work unlimited overtime without pay and were subject to strict discipline.

John said he would often be sent to patrol at the Leopardstown Races after Christmas.

“You’d be sent over on duty two hours before the first race in the middle of winter, no one there and you’d be kept for two hours over,” he said. At that time, garda regulations were extremely strict and covered a wide range of topics.

“One of the offences in the regulations was marrying without leave. You had to apply for permission to get married. If the superintendent did not like your bride to be, you were forbidden.

“If you got married, it was disciplinary offence and you’d have been fined,” John said.

Money was important, but so too were improvements to working conditions.

“When I joined there was no limit on the amount of hours you did and no overtime for it. You were required to work for the whole month and you got two days monthly leave and you didn’t always get them,” John said.

When the gardai had been founded, they incorporated many of the regulations in place for the RIC. These rules would not be updated until the 1960s.

“Everything was chronicled in it. You were forbidden to own a greyhound it was in the regulations, but you could own a racehorse,” John said.

When asked about Jack, John said his first impression was that Marrinan was a “very intense, clever guy” who “could think on his feet”.

“At all meetings, they’d be very rowdy, but Jack would sit down and he’d come up with something at the end that everyone would find acceptable.”

Jack was a “born leader”, John said, who could have risen through the ranks of the organisation or excelled in a management role in the private sector. He turned down a promotion and took up the role of general secretary of the GRA, which he held until his retirement in 1989.

John shared one story about the situation faced by a young married guard with a child, who was stationed in Kilmainham and living in bad accommodation.

“It got so bad the wife had gone home to the mother. I got a letter from Jack, he said ‘a young guard came into see me, he’s very young, very married and very poor’.”

“It was coming up to the summertime and Bray was very busy at the time. They used to send out guards every summer to help out here. I suggested he could be one of them. With no paperwork, he was out at the end of the week,” John said.

He also recalls celebrating with Jack during the early 1960s that the top pay had gone above £1,000 a year.

Tim first met Jack in the 1970s while serving as a young detective in Store Street station in the wake of the Dublin-Monaghan bombings.

At rush hour on Friday, May 17, 1974, three car bombs, likely set by loyalist paramilitaries, exploded within minutes of each other in Dublin. Twenty six people (including a pregnant woman) were killed on Parnell Street, Talbot Street and South Leinster Street, with another 258 injured. About 90 minutes later, another car bomb went off in Monaghan with the loss of seven more lives.

“It was a terrible time, the heart and soul of Dublin was blown asunder that day,” Tim said.
Tim was charged with assault in the wake of the Dublin-Monaghan bombings. He got a message to go and visit Jack at this office.

“He gave me legal aid and I went to the court, stood in the dock for two days and was acquitted,” Tim said. “Later in life I heard Marrinan wasn’t well and I went to see him. He gave me all his stuff, that’s where the book came from.”

According to Tim, Jack’s “crowning achievement” was the setting up of Conroy Commission and its report published in 1970. This recommended changes to pay and conditions for gardai and the introduction of overtime.

However, the report was never fully implemented. Tim suggests this was partly due to shock at the murder of Garda Dick Fallon on April 3 1970. At that time, Garda Fallon was the first guard to be killed in the line of duty in almost three decades. He was shot dead while chasing bank robbers.

When asked for his view of the guards now, Tim argues that they are in need of heroes.

“The guards always needed heroes, the only problem is the heroes are all dead, they were murdered. We can only look inside our hearts.

“I loved the people that you met. They stood with you. I think it needs rejuvenation, it needs the people of Ireland to get back to what we did,” he adds.

The book also recalls GRA and AGSI members walked out of the Wicklow Town Garda Station in October 1982 in protest at the poor condition of the building  They carried out their duties from a car park across the road “undeterred by the teeming rain”.  Within hours, funding to construct a new garda station in Wicklow town was approved.

‘Changing of the Guard’ is Tim’s third book.  In 1997, he self-published ‘Peaks and Valleys: The ups and downs of a young Garda’ followed by ‘Get Up Them Steps’, a memoir about his experiences serving with An Garda Síochána.

His mother was a great storyteller and following a family tragedy, Tim began to write her long letters about his life in Dublin. Later, he started to write stories for ‘Ireland’s Own’ under a pseudonym and began to contribute to garda magazines. Garda training also helped Tim to develop his skills as a writer.

“When you joined the guards you were handed a notebook and told day, date time and place,” Tim said. The habit of writing in notebooks is one that Tim continues to this day.

“You had to keep a record in the notebook, that was the start with my mother of my writing. I’m still at my notebooks.”

He added: “This book manifested itself out of bad health,” Tim said. “I got kidney failure and I said ‘I’m going to have another rattle at a book’.”

Around that time, Jack gave him his archives and records. He passed away in May 2015.