‘A Farewell to Poetry’ reviewed in Books Ireland 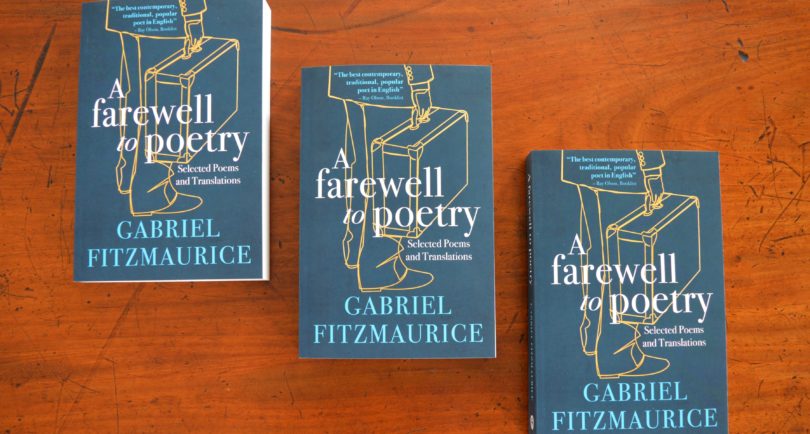 A Farewell to Poetry by Gabriel Fitzmaurice reviewed by Fred Johnston in Books Ireland.

Irish bards and musicians had a habit of composing ‘farewells’. Turlough Carolan gave us ‘Farewell to Music’; Michael Hartnett ‘A Farewell to English’ in 1975. The ‘farewell’ motif seems almost always to be a farewell to a certain period or act of culture, rather than to, or by, an individual. Fitzmaurice, a prolific writer, poet and translator from Irish, takes up the theme. His ‘farewell’ channels Hartnett: the end of a culture, the fading of a way of life, and with it the songs, stories and beliefs of an Ireland more in tune with the themes of fellow Kerryman John B.Keane.

This is a selection from 24 published collections, including translations – into and out of Irish – and previously unpublished poems. Some of the shorter poems tend, regrettably, to amble too casually towards the naïf to do justice to Fitzmaurice’s skill. His translation of Raftery’s ‘Mise Raifteiri an File’ has that – to-my-mind – controversial couple of lines: ‘Look at me now/My back to the wall’. I have heard it said that, having been refused entry to a pub in Balla, Co. Mayo, Raftery played on its Irish name with the lines: ‘Here I sit/With my arse to Balla’. Did some Victorian tut-tut at this?

Fitzmaurice’s ‘The Deserted Village’ echoes Goldsmith (though some say Goldsmith wrote about an English, not an Irish, village) and is a suitable lament for things passing. The argument that rural Ireland is neglected is to my  mind legitimate, but is a ‘folksy’ rural Ireland to be desired? Elsewhere, Fitzmaurice’s love of music surfaces in poems to Johnny Cash, his D-28 Martin guitar, and Kris Kristofferson. He is scathing of Irish poetry culture today, but in the poems of family, local things and people that have vanished, Fitzmaurice is at his most lyrical and, dare one say it, loving. Perhaps he is one of the few poets left who see the universal (as Kavanagh did) in the local. He concludes his introduction with ‘This, I feel, is my final book. The job is done.’