‘A Farewell to Poetry’ reviewed in The Irish Times 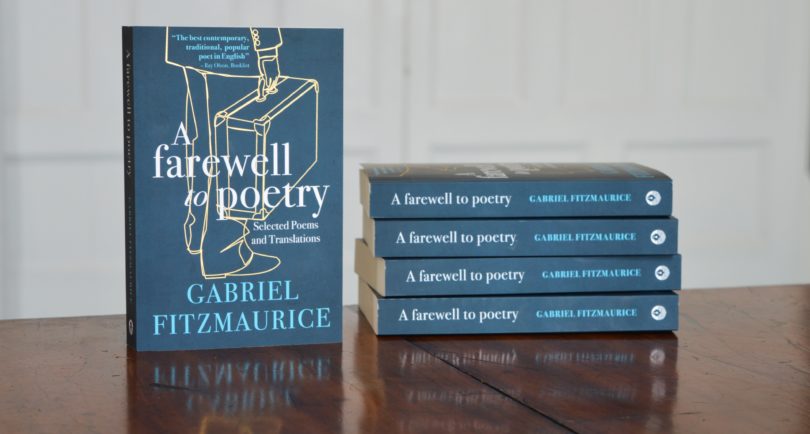 A Farewell to Poetry, reviewed by Martina Evans in the Irish Times.

From his home in Moyvane, Co Kerry, Gabriel Fitzmaurice has been charting a vanishing rural world from its centre all his life. Although we hope otherwise, Fitzmaurice declares A Farewell to Poetry: Selected Poems and Translations (Currach Books, €19,99) is his “final book. The job is done”.

A local school teacher, Fitzmaurice experienced these changes at first hand, not least the “new curriculum” where “the inspectors swooped like flies…the new dark ages care/ more for ticking boxes/ Than for a teachers flair.” Described as Irelands AA Milne, Fitzmaurice’s signature rhymes are clear and true, injecting a joyousness into hilarious, subversives poems such as Counting Sheep, when a school inspector asks:

Son, in a certain field

Are a hundred sheep, when, suddenly

Fifty run to a field nearby –

How many sheep are left my boy?

‘None sire.’ is the child’s reply.

‘You Know nothing about maths,’ the inspector snorts

‘Nor you about sheep,’ the child retorts

Fitzmaurice puts his strong rhyme to darker use too in the sonnet My Father Hired with Farmers at Fourteen:

My father hired with farmers at fourteen –

He worked a servant boy who farmers deemed

Barely worth their shillings and a bed…

I’d never know the places Dad was at.

Fitzmaurice’s strong suit is form coupled with a vernacular which breathes new life into old poems, such as this translation from Dáibhí Ó Bruadair:

Just my luck I’m not pig-ignorant

Though it’s bad to be a boor

Now that I have to go out among

His ability to hold opposites in tension shines in his memoriam to two members of the Moyvane community, one a Republican, the other “some sort of Loyalist”, both killed during the War of Independence:

I imagine you as one –

Sundered by the Gun.

From one small patch of Ireland. Fitzmaurice expresses grief, joy, faith and doubt, his poems proof that the universal shows itself most clearly in the concentrated particularities.