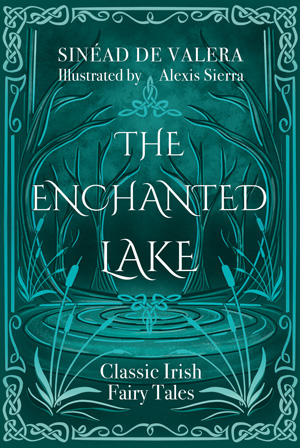 Sinéad de Valera’s The Enchanted Lake weaves a world of magic like no other. From witches and mermaids to giants and princesses, this new edition, full of beautiful and colourful illustrations by the artist Alexis Sierra, brings together eight of her classic Irish Fairy Tales. Set in the Erin of old, these timeless tales are brimming with ancient charm, captivating characters and magical locales. The Enchanted Lake will transport the reader to a world of wonder and enchantment that will invite them back again and again.

Sinéad de Valera was born in Balbriggan in 1879. She worked as a national school teacher and taught Irish for the Gaelic League where she met her husband, Eamon de Valera. She published some thirty titles, including The Four-Leafed Shamrock (1964), The Emerald Ring and Other Irish Fairy Tales (1976) and The Miser’s Gold (1970).

Alexis Sierra is a young and upcoming artist and illustrator. Originally from Spain, he has been working out of Dublin for close to two years now. He has contributed his talent to a collection of poems for children recently titled The Halloween House by Riley Cain (Currach Books, 2020).