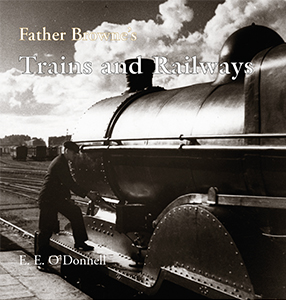 During Father Browne’s long life a revolution took place in the realm of standard and narrow-gauge railway transportation. With a keen eye for the photographic moment, Father Browne recorded railwaymen going about their various tasks. Passengers are captured arriving, departing, changing trains and dining. Train crashes feature too, including one which was very serious. The ‘Travelling Post Office’ which ran between Dublin and Cork is photographed in every aspect.

Most of the photographs in this book were taken in Ireland during the 1930s. At that time Ireland had a lot more railway lines than it has today, with very few towns further than ten miles from the nearest railway station. 3,400 miles of track covered the country and these had been laid down by many different companies. Father Browne photographed all of these, as well as travelling on many of the country’s narrow-gauge railways.

Among the distinguishing characteristics of this collection of railway photographs are the following. First, the pictures were taken by one of Ireland’s greatest photographers and they have an inherent artistic merit. Secondly, there is an emphasis on people that is usually lacking. Thirdly, although the majority of the photographs were taken in Ireland and England, this book has the added pleasure of including some trains from as far afield as Suez and Sydney.

This is the sixteenth book to be published from Father Browne’s Collection, with Annals of Dublin and Father Browne’s Titanic being the most successful of the earlier volumes.

He was born in Cork in 1880. In 1897, he toured Europe with his camera and on returning to Ireland joined the Jesuit Order. After his two years of noviceship, he attended the Royal University in Dublin where he was a classmate of James Joyce. He is mentioned several times in Finnegans Wake. He served as chaplain to the Irish Guards in World War I, after which he suffered poor health, but two years in Australia cured him. On his return to Ireland, priestly work took him to practically every parish in Ireland. He won numerous photographic awards and died in 1960.

E. E. O’Donnell holds a doctorate in communication from the University of Southern California at Los Angeles. He has been Curator of the Father Browne SJ Collection since he discovered 42,000 of the photographer’s negatives in the Jesuit Archives in 1985.