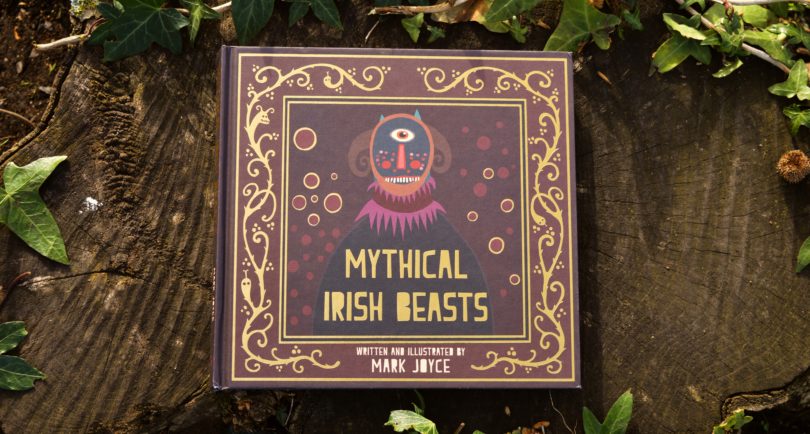 Once in a while, a new Irish book comes along that just stops you in your tracks. This month Mark Joyce’s superbly illustrated new book Mythical Irish Beasts is that book.

It’s a work of near magic, lovingly illustrating some of the most famous mythical creatures from ancient Irish mythology for kids – and frankly, for adults too – who might not have heard of them before.

Long before St. Patrick and Christianity arrived, Ireland was a wonderfully pagan country filled with legends of epic cattle raids and unforgettable feats of strength and courage.

We know that many of these old Irish legends were recorded in the early medieval era in manuscripts like the famous Acallam na Denorach (“The Tale of The Elders”) that dates back to the 12th century and is still the oldest surviving work of medieval Irish literature, so Joyce goes back to the prime sources, retracing the ancient tales of sea serpents and other magical creatures to delight and captivate the imagination.

Taking a deep dive into our collective past has clearly inspired this gifted writer and illustrator, who tells us about ferocious monsters, giants and beasts with great humor, but who also makes room for the kooky and the strange, as the Irish myths themselves do.

Did you know how many Irish place names arise from the mythic stories, battles and monsters of our ancient past? Take the Swilly in County Donegal (or Loch Suili, as it was once known).

The River Swilly gets its name from a many-eyed monster that once lived in a pool there, the mythical source of the river at Meenaroy. Suileach had 200 eyes on either side of its head, earning its name in Irish, which means “full of eyes.”

St. Columba, or Columcille as he was also known, was a real-life man who was said to have banished this monster back to his lair at the source of the river, where after an epic battle, he cut the creature in two with his long sword. Mad stuff, but fun stuff.

Joyce also tells us about the magical enchantments that can transform a person into a cat, a swan and an otter. Another enchantment involves a Fenian man who was transformed into a woman every alternate year (what a rare insight that would provide).

There isn’t a leprechaun in sight in this fascinating book that looks every bit as beautiful as it reads. Think of what a book that matched the Ulster Cycle to Studio Ghibli in Japan might look like and you begin to understand Joyce’s achievement with this book.

With its feel for magic and its appeal to the imagination of young and old, it may soon become the kind of indispensable children’s classic that they then carry with them through their adult lives.

The illustrations are so powerful that they will leave you slack-jawed in admiration of Joyce’s achievement. Rarely does a book, its subject, its writer and illustrator come together so beguilingly to create that rarest of all things: a perfect book.

Here it is. Buy it and you’ll treasure it.